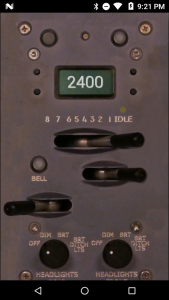 Main Control Screen – When the phone connects to the receiver, you will see the main control screen. I have tried to mimic the Protothrottle as much as I can for a phone app but I had to take some shortcuts. The horn is not a lever like on the PT, it’s a button in the upper right. Horn is on when pressed, off when not. The Aux button to the left is like the PT, press once it locks down (on) press again it comes up (off). Same for the bell button. Tap once for on, tap again for off. The notch lever is touch based and not a slider. There is a small circle that floats above the notch numbers that indicates which notch you are at. Tap on the right to bring the notch down, tap to the left to go up. Sound and vibrate hard coded for now.

The Brake lever is a slider control. For now is not programmable quite like the PT. You cannot assign a pulse or ramp up like the real PT, it’s just on or off. Sorry about that. But this is just an Android limitation, the Receiver will process pulsed brake for both DCC and the ESC motor control if you have a real Protothrottle.

There are only two selections for the knobs. On and Off. Don’t set the knobs to the same function code.

Tap on the number display to go to the Configure Control Screen.